Summer Term
Maths - We started the half-term by using our mental and formal strategies of multiplication and division to solve worded problems. We then spent the remainder of the half-term term working with fractions. We ordered and compared unit and non-unit fractions and found fractions of discrete and continuous quantities. We spent some time exploring the concept of equivalence and adding and subtracting fractions with the same denominator. The children then completed a range of fraction worded problems, including multi-step problems.
English - The focus for our English lessons for most of Summer 1 was on playscripts. The playscript we looked at was Alice in Wonderland. After analysing features of a playscript, we spent time comparing the playscript to a prose version of the same scene and compared how dialogue is presented in different ways between the texts. The children enjoyed reading aloud and performing a playscript to show their understanding through intonation, tone, volume, and action.
We then moved on to look at poetry and focused on free-verse poems. Our chosen poems were the Magic Box by Kit Wright and Words are Ours by Michael Rosen. We spent time exploring the effects created by language choices that the poets used and justified our preferences. We ended the unit by writing and performing our own poems.
In Guided reading we continued to develop our comprehension skills using the VIPERS framework (Vocabulary, Inference, Prediction, Explanation, Retrieve, Summarise) and finished reading Stig of the Dump by Clive King and then read Dinosaur Trouble by Dick-King Smith.
Science - Our topic for Science last term was Light. We investigated which surfaces reflected light and recognised that shadows are formed when the light from a light source is blocked by a solid object. We enjoyed carrying out several investigations during this unit of work.
Geography - We studied rivers and enjoyed learning about key features of a river and how a river changes on its journey from its source to the sea. We used maps and digital computer mapping to locate and describe river features studied. We finished the unit by identifying the names and key characteristics of some of world's major rivers.
RE- Our focus in RE last half-term, was sources of wisdom. We began by discussing what wisdom means before moving on to consider what makes a ‘special’ book a ‘sacred’ book and how it should be treated. We looked at Christianity and Islam as our chosen religions. We learnt about the parable of the Good Samaritan and what it means today, who Jesus was and what he did, the holy Trinity and the impact of Pentecost. We then looked at what Muslims believe about the origins and authority of the Qur’an and how Muslim's beliefs affect the way Muslims live their lives today.
PSHE - Our focus in PSHE was relationships - we looked at how to build positive relationships, maintaining relationships and different types of relationships.
French - We looked at re-telling the story of Little Red Riding Hood in French.
Music - We continued our skills of listening and appraising and focused on 'Bringing Us Together,’ a disco song about friendship, peace, hope and unity by Joanna Mangona and Pete Readman.
PE - Our focus was on Fitness, Rounders and Cricket. We did lots of circuit training and linked this to Science and discussed what was happening to our bodies when we exercised.

What we have been learning about in Autumn Two

In English, the children thoroughly enjoyed reading the book, 'Mini-Rabbit Not Lost.' We are very proud of all the children and how they have grasped a number of grammatical terms taught this half-term. The children have produced some lovely pieces of writing, demonstrating the fantastic progress they are making in English.

In Maths, we have continued to develop vital mental mathematical skills and number facts, focusing on mental methods in addition and subtraction. The children particularly enjoyed learning about measure at the start of the half-term.

Our topic in Science has been Forces and Magnets and the children have had a lot of fun doing a variety of investigations. They particularly enjoyed designing and creating their own magnetic games, which they then had great fun playing.

In PE, the children have focused on Dance and have produced a range of movement patterns linked to animals from around the world. These performances have been fantastic to watch. We have also been fortunate to participate in the Dacorum School Games Year Three Mini Olympics. This year the competition was held remotely at Yewtree school and the children had a lot of fun participating in a variety of activities.

In RE, time has been spent learning about advent and Christmas traditions around the world. We chose Mexico as our country of focus, as it linked nicely with our topic of North America.

In PSHE, children have had some really beneficial discussions looking at healthy relationships and what it means to be a good friend.

What we have been learning in Autumn 1

This half term, year 3 have embraced their learning in English. The imaginative book ‘Tuesday’ provided opportunities for the children to use the pictures to recall the story and we used this text as inspiration for writing our own stories.

Within maths, the children have worked hard to reactivate year 2 learning and we have now progressed to looking at place value at a year 3 level.

In PE, the children have enjoyed playing games to build fitness and endurance. Alongside this, we have been discussing the importance of maintaining a healthy lifestyle and the impact that exercise has on helping our bodies get strong

In Geography the children have been learning about mountains, how they are formed and some of the most famous mountain ranges worldwide and in the UK.

In RE, the children have enjoyed learning about symbolic actions in Islam and Sikhism and what light symbolises in the Christian faith.

The children have really enjoyed the books we have been focusing on during English this half-term They loved writing their own endings for the imaginative book, 'Tuesday' and particularly enjoyed role playing some parts of the story in the alternative fairy-tale, 'A Paper-Bag Princess.'

The children have also been really interested in RE lessons where the focus has been on understanding how symbols are used in different religions to signify meaning and actions. The religions we have focused on have been Isam, Christianity and Sikhism. The children have taken an active role in the lessons and have been really eager to share their personal knowledge and experiences.

Our WOW moments this term were related to our class reading the imaginative book, 'Tuesday' - attached are some photos of our crime scene when the frogs had invaded our classroom and left lily pads and water everywhere. We also enjoyed imagining that the classroom was a swamp. The children used their senses as swamp-like music was playing and there was vegetation that the children were examining. They then used their experiences to help inspire them to write a descriptive account of what a swamp would look, smell, feel and sound like. 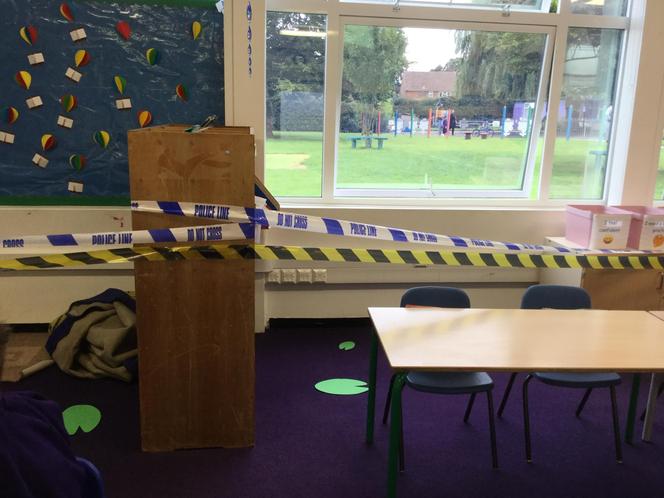 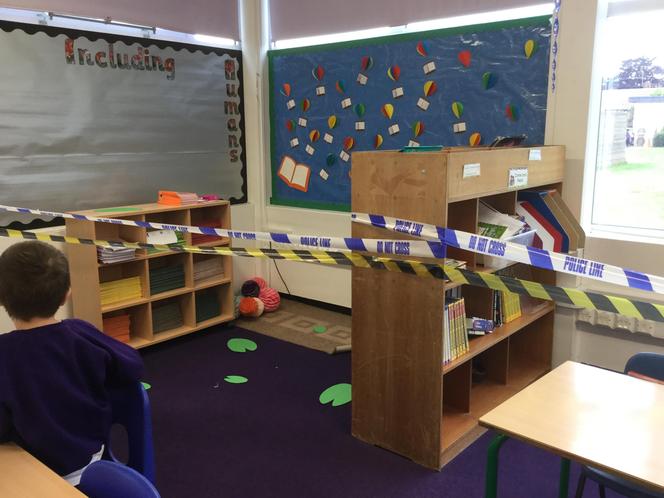 Learning and Laughter, Achievement and Aspiration, Safety and Security Everyone doing the very best they can

Unfortunately not the ones with chocolate chips.

Some cookies are necessary in order to make this website function correctly. These are set by default and whilst you can block or delete them by changing your browser settings, some functionality such as being able to log in to the website will not work if you do this. The necessary cookies set on this website are as follows:

Cookies that are not necessary to make the website work, but which enable additional functionality, can also be set. By default these cookies are disabled, but you can choose to enable them below: