This year the DSSN Cross Country Championships were held here at Yewtree Primary School and it was a fantastic week. All pupils in years 1- 6 took part, running around the Yewtree cross country course. It was slightly slippery, pretty wet very muddy but so much fun. Everybody tried their hardest, navigating the obstacles and running as fast as they could. Well done to all of our pupils and we cant wait to see how we did compared to the other schools in Hemel Hempstead.

Hands at the ready  . . . .  get steady . . . . we were at the year 4 speedstack competition. Competing in the 3-3-3 boys & girls, 3-6-3 boys & girls and the 3-3-3 mixed team stack pupils dazzled us with their their composure, speed and accuracy. It was fantastic to see all pupils working together to achieve their personal best, contributing to their team. A big well done to all of year 4 who took part and an even bigger well done to Mrs McDonald who was the fasted adult of the day completing the 3-3-3 stack in a little over 4 seconds (the world record is only 1.3 seconds!) 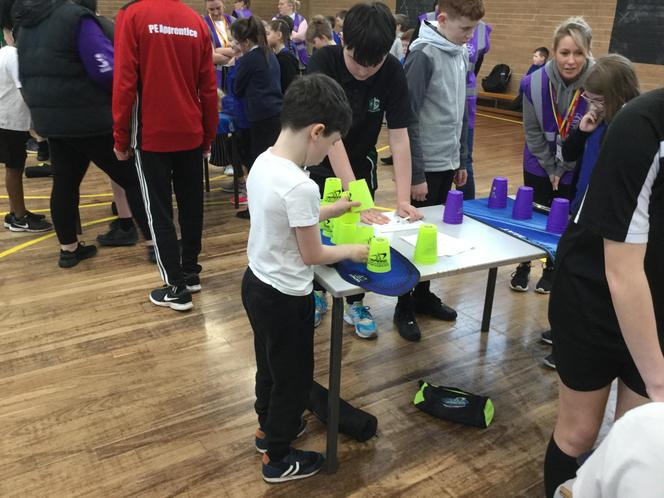 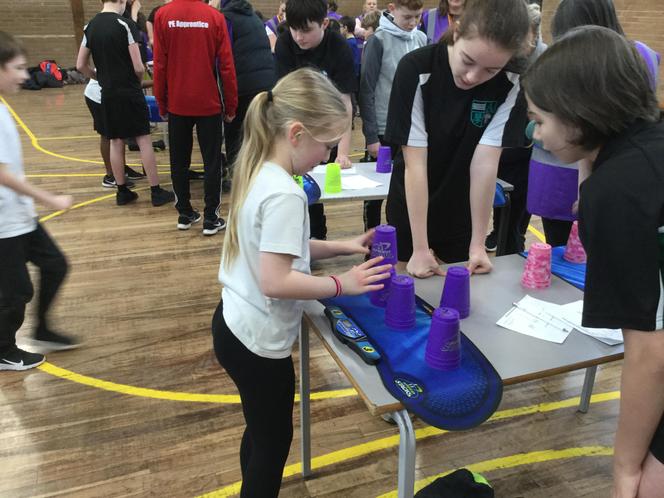 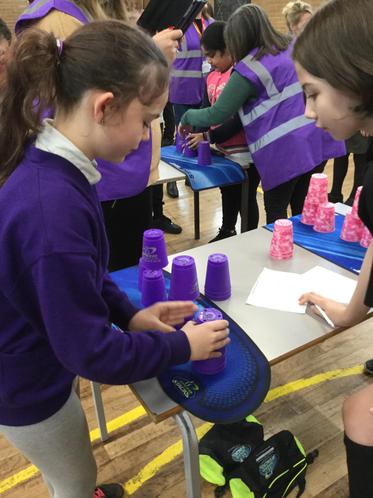 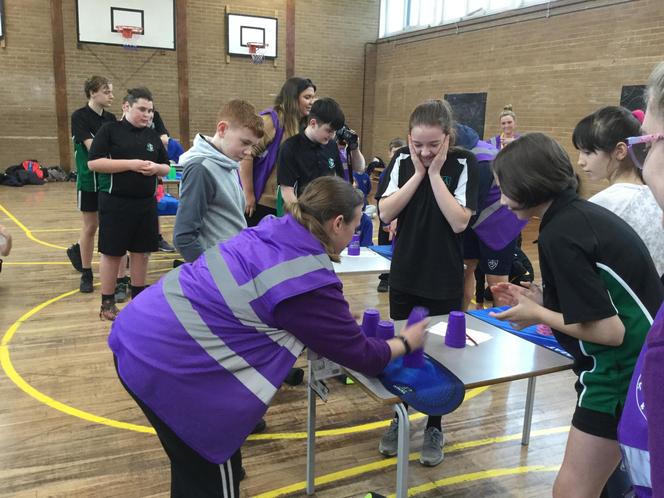 Day two of gymnastics and it was year 3 & 4 time to show off their gymnastic skills at the KS2 Gymnastics Competition. Pupils; vaulted, landed, rolled, supported, balanced and smiled their way through their performances. With a big audience it was very scary and nerves were high but pupils composed themselves and gave their best. A huge well done to all pupils that took part. You were all amazing.

On Wednesday 12 year 1 and 2 pupils competing in the KS1 School Games Gymnastics competition run by the Dacorum School Sports network. pupils performed a short sequence together and a small jump from a  bench that they had been practising at lunch times. Pupils were very lucky to also meet Max Whitlock (British Gymnast) who had sneaked into the.

Well done to all pupils you did fantastic.

This week Yewtree entered the School Games Inclusive Archery Competition where pupils battled it out to score as many points a team by firing arrows at a target. We were up against 3 other primary school and and one secondary school, but this didn't put our pupils off. Scoring 9's and 10's, team 1 fired their way into first place, taking home the gold medals and securing a place in the county finals in a few weeks time.

Well done to all pupils who took part and good luck at the county finals.

On Thursday Mr Moles and Miss Hill took two teams to play in the Year 5&6 Basketball 'Slam Jam' competition. This consisted of them playing against many other schools in Dacorum. Yewtree's A team played fantastically and managed to win 4/5 of their matches. Yewtree's B team also played brilliantly and managed to come 1st place in their pool on the Slam Jam challenge! Both teams enjoyed their time at this competition and played to the best of their abilities. Well done to both teams!

Yewtree football team trained very hard last half term when they had training and it showed as they went on to win all their games this half term. Some victories were harder than others but they dug deep and won. They have not lost a game in the league which means they will be through to the quarter finals. A huge well done to the football team and thank you Mr Moles for all of your hard work.

On Friday 14th February 2020 Yewtree Primary School were boated by Tom Davis, British judo champion. Tom shared his sporting journey with our pupils showing them that he started in the same place they did - taking part in many different sports in school. In Toms journey he suffered many setbacks even from a young age but this did not stop Tom trying his best and never giving up.

Later in the morning Tom joined in with the pupils at Yewtree Primary School on fitness morning where pupils walked, hopped, skipped, ran and even shimmied around the playground. This was all part of Hertfordshire’s mass daily mile initiative where all schools were joining together taking part in a fitness morning at their own school. The pupils at Yewtree take part In daily moving activities including running around the playground whilst at school to help with their physical and mental well being.

Toms message to pupils was to never give up and always try your best very similar to Yewtree's value of “Everyone doing the very best they can”. 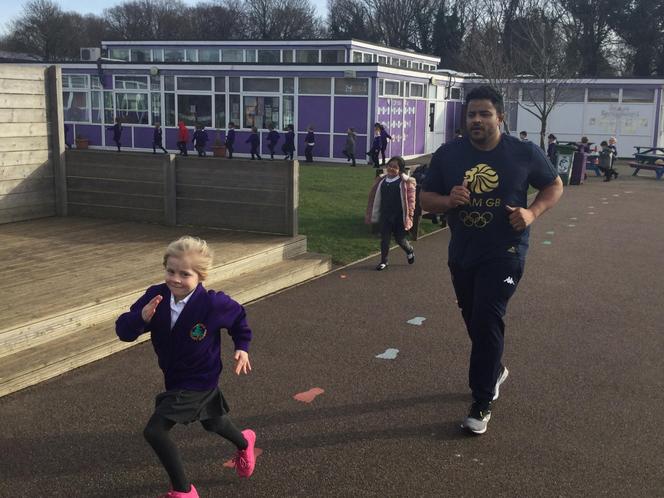 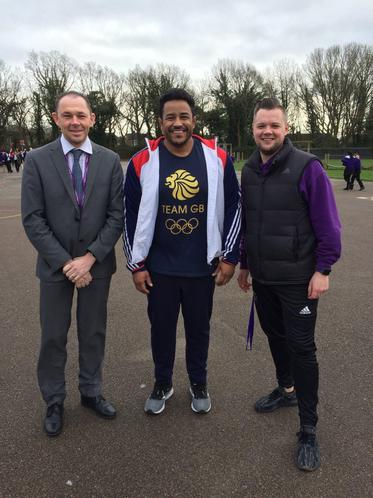 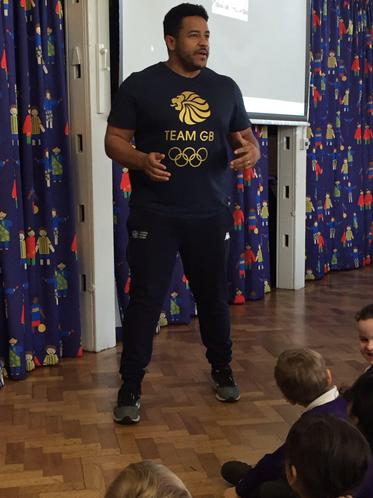 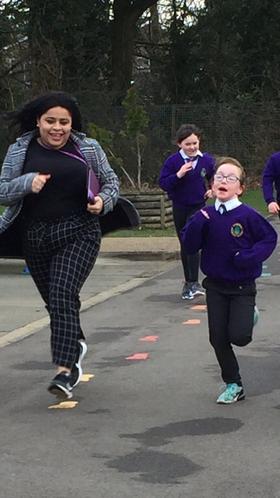 On Wednesday 12th April some year 6 pupils competed in the Year 6 School Games Indoor Athletics Championships. On the track pupils competed in short sprints / relays / team races / obstacle races and on the field their there basketballs and javelins, jumped long and high trying their best throughout. Pupils gave it their best and managed to secure 5th place. Well done to all pupils who took part int his competition.

Competing against 35 other schools the Yewtree Year 6 Dodgeball teams competed in a tournament style competition at Ashlyns School. Playing six games in their pool each time worked together to score as many points by hitting the opposition and catching balls. Both teams played fantastically with team A losing 2 games and team B only losing one.

At the end of the first rounds Yewtree team B had made the quarter finals. The game was against South Hill and it was brilliant to watch, both teams gave 100%. The game was close and Yewtree won by 6 points.

Onto the Semi - finals and Yewtree was up against Thomas Corum, Yewtree gave their best but unfortunately lost this game leaving them in fourth place in the competition.

Well done to all pupils who took part.

This year at the year 5 Dacorum Dodgeball Competition Yewtree entered two teams into the competition. This year was a huge event with over 30 teams entering.  Both teams played very well in the group stages, dodging, ducking and diving around the courts scoring lots of points with very little outs.

At the end of the rounds, team A made it though to the Semi finals against Kings Langley Primary School where Yewtree won, putting them into the final against Thomas Corum Primary School. The final was neck and neck the whole game with both teams showing their determination to win. At the final whistle Yewtree had given it all they had but had unfortunately missed out on 1st place by 3 points.

Well done to both teams and all pupils who took part in this competition. 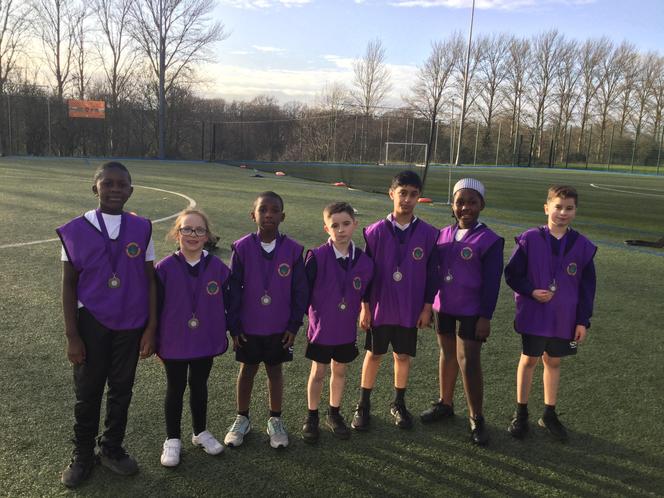 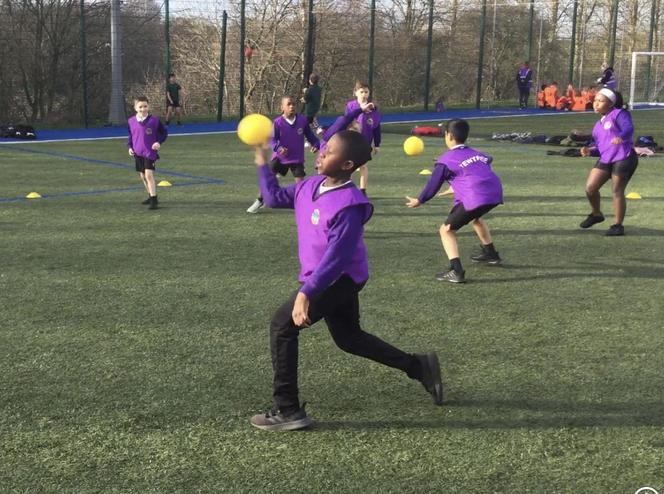 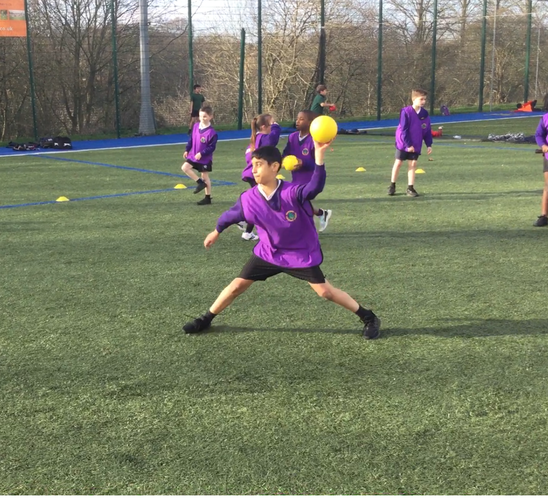 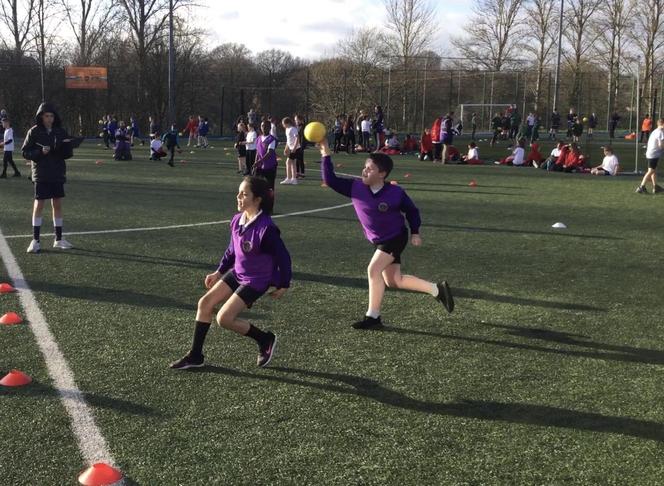 This class competed in their house teams in a dodge ball tournament.

Each house team played each other for 2 minutes and were awarded points depending on whether they won or not.

The sports crew did a warm up of Simon Says and then divided the teams up.

Year 2 loved their competition and all played really well.

We gave the result at the end and well done to Earth who were the winners and awarded house points!

This week Yewtree football team played their first football game of 2020 against Pixies Hill Primary School. The weather was damp, the dark was looming and the pitch was very very boggy. However, this did not dampen the high spirits of the team who were ready for this game.

During the first half Pixies Hill scored an early goal but we did not stop battling. Both teams played great football with many shots on target but with both goal keepers on form the first half finished 2 - 0 Pixies Hill.

The second half Yewtree upped their game even further, closing down balls, intercepting passes and creating many shooting opportunities. Again, it was a great second half to watch and with all of Yewtree's hard work the score finished with a 5 - 2 win to Yewtree Primary School.

Well done to all pupils who played and good luck for your next game against Greenway Primary School on Friday 7th February 2020.

The netball team played their first game of 2020 this week against Boxmoor Primary School. When we turned up the girls were in high spirit as they had been training hard with Miss Hill focusing on maintaining possession and gaining possession. Both teams started well with Yewtree keeping possession for most of the first quarter. The next two quarters both teams played well and fought hard to score a point but at the end of the third quarter the game was still 0 - 0. In the last 10 minutes both teams had some great shots and worked so hard but at the end of the game it was a 0 - 0 draw.

Well done to both teams.

Player of the game was Christiana for her non stop movement.

This half term KS1 have been competing in Dacorum virtual Great Run. Every week in their PE lessons they have been training to run 300m as fast as they can. Every week all pupils are timed and then an average for the class is calculated. This year pupils worked so hard reducing their time significantly. With the results in Yewtree Primary School came 5th overall but a huge well done to Patrick and Tyler who were the fasted boys overall and Scarlett who was the fastest girl overall.

Year 1 took part in their first ever intra competition! They had target games as their competition and took part in activities such as archery, bean bag throw, boccia, curling, football, golf and a crazy catcher activity!

Pupils loved them all and had a fantastic time competing against the other house teams.

We did a warm up with them first to get them ready and then they all went round with a sports leader in their house teams.

At the end we did a little game of duck duck goose whilst scores were worked out....

The winners being Water for the first class and wind for the second!

Well done to all who took part!

This half term the Year 5&6 Football Team have played many games against other schools in friendly competitions and the DSSN Football Plate League. The team have played tremendously, not losing a single game in the league. Training as been hard but it is evident in the games of how hard the boys have worded. Thank you Mr Moles for your training sessions.

The boys have a couple of games left in January, we wish them the best of luck ad have our finger crossed for a semi-final position in March.

The netball have been working very hard at training with Miss Hill this half term and this can be seen from their vast improvement in recent games. The netball team have played friendly games and one league game. Whilst the team did not win this game they all played well and learnt a lot of things to put into their next game. We wish them the best of luck in the rest of their league games in January. Thank you Miss Hill for your training sessions.

This year at the Dacorum School Sports Network, Year 1 Multi-Sports competition all of Year One took part in a variety of different activities, competing against other schools in Dacorum. Pupil battled against other teams at; giant speed stack cup races, bean bag throw, obstacle course, basketball relays, curling and boccia, All pupils in year had a fantastic time, competing in sports they had done before and having a go at sports that were new.

Well done to both classes who gave 100% and to Year One Dodd for winning the competition. 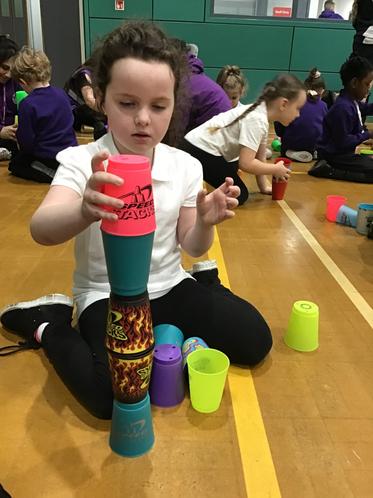 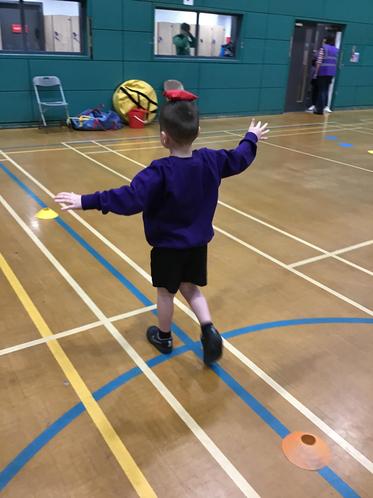 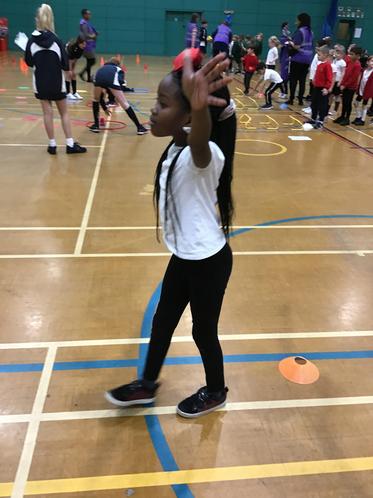 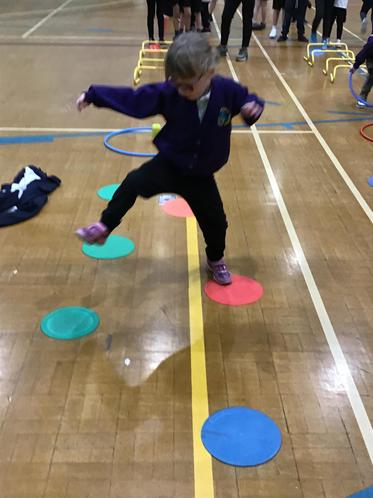 Year Two participated in the DSSN Year Two Target Games Competition on the 25th November. Pupils really enjoyed themselves at this event, competing against other schools in Dacorum in archery, golf, football skills, boccia and many more! The pupils particularly enjoyed the archery and managed to score over 200 points on this station! All pupils worked so hard and did excellent at all stations. A fantastic afternoon for Yewtree. 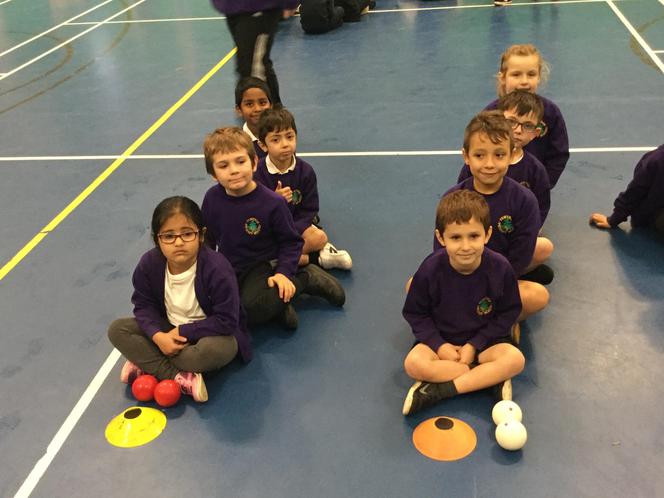 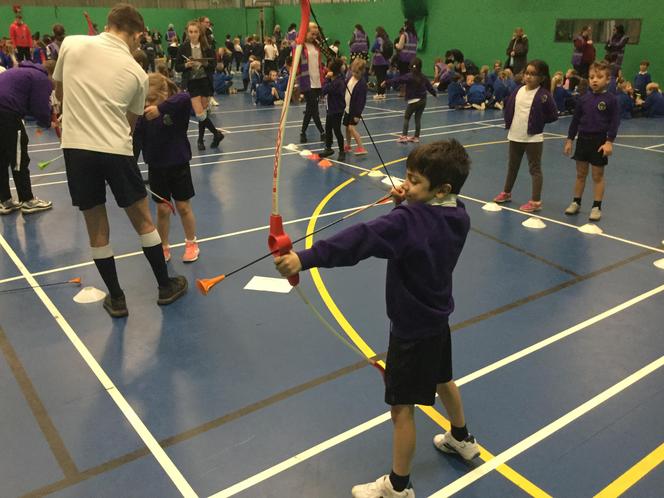 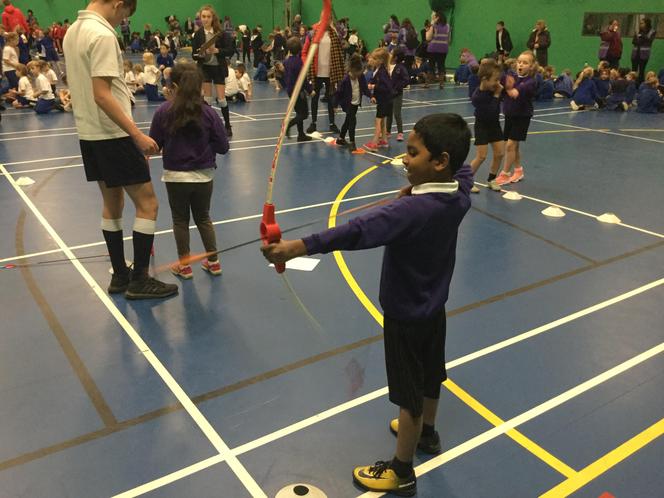 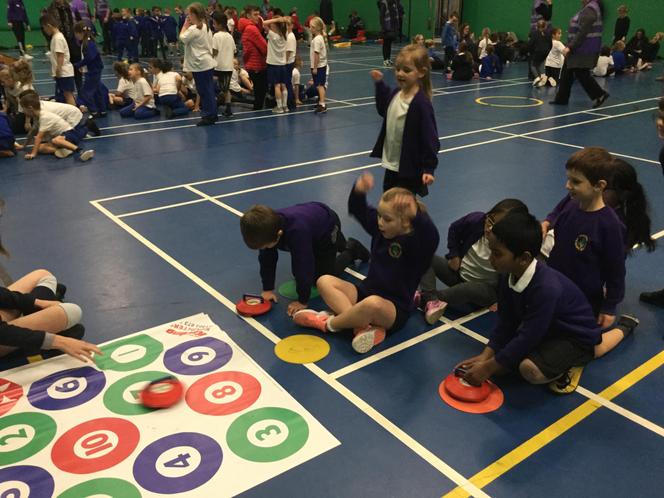 Learning and Laughter, Achievement and Aspiration, Safety and Security Everyone doing the very best they can